Use 'HOLIDAY15' TO SAVE 15% OFF NOW THRU Cyber Weekend! Sign up for new designs, exclusive savings codes & cool stuff! 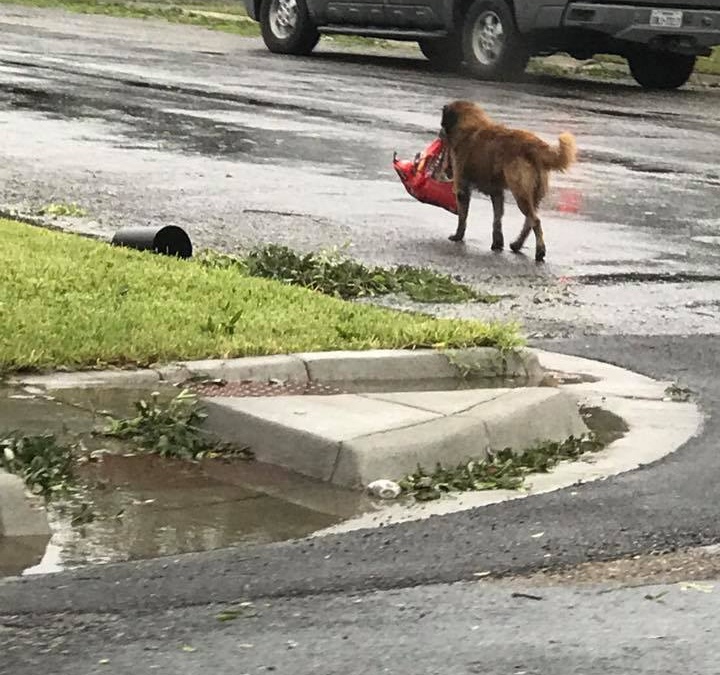 Otis, the German Shepherd mix, is sure getting a lot of attention all over the world these days. Otis, who became spooked from the Hurricane Harvey storm, in Houston, Texas ran off with his food and was seen running down the street with the ba in his mouth, when somebody photographed him. That person put Otis’s photo on Facebook and the photo went viral and since then, Otis has become a world wide sensation.

According to the Washington Post………..Just before Hurricane Harvey hit the Texas coast, Salvador Segovia left his grandson’s dog, Otis, in his screened-in back porch, along with food and water.

But the storm must have scared Otis, so he busted open the screen door and ran away on Friday night in Sinton, not far from Corpus Christi.

“I stuck my head out yelling and yelling, and no Otis,” Segovia said. “The following morning, I got out and kept yelling, circled the block and everything, and nothing. We didn’t know where Otis was.”

Meanwhile on Saturday morning, Tiele Dockens was on her way to check on the houses of some friends and families who had evacuated when something caught her attention. A dog was walking down a street, carrying a big bag of dog food.

“It’s like he’s on a mission,” said Dockens, who lives a few miles away from the Segovias. “I just thought it was so cute.”

So she took a picture and shared it on her Facebook page. The photo quickly went viral, and the dog became an online celebrity.

We think Otis is the most famous dog in the USA right now. We are pretty sure here at Sassy Dog Fashions, that Otis and Segovia, will be making a trip to the White House real soon and will be soon appearing on national news for formal interviews.
We are keeping Texas in our prayers and we hope that all the dogs are keeping safe in the Houston area and are able to find food until their owners can get back to the homes they abondoned.