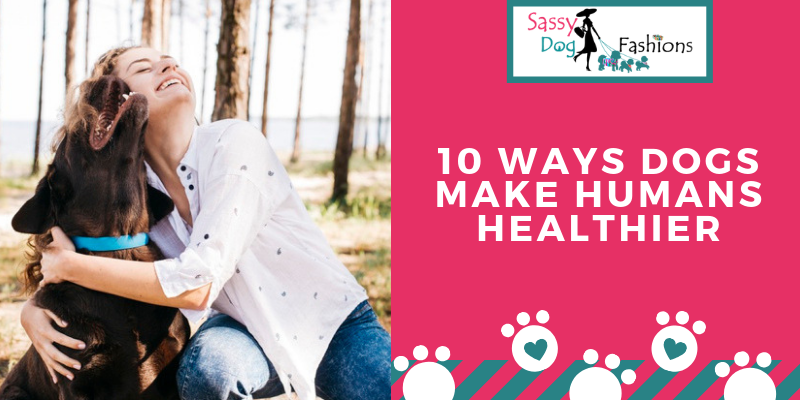 The importance of dogs to man is not just in serving as pets in the homes. There is more to having it on a dog leash and moving around with your dog. There are health benefits human beings get from dogs, and to be candid, these are many, but in this write up, I will be sharing with you ten ways dogs can make you healthier.

2. Dogs help their owners to have healthier hearts.

When you laugh a lot, it has a positive effect on your heart. This is part of what you get when you have a dog. With various dog costumes available in pet store or pet shop, you can dress up your dogs in funny ways that make you smile. And dogs also have that capacity to do funny things without being dressed in funny ways. This has been backed by some studies that show that people having dogs have good heart rates compared to those who do not have.

3. Dogs have the ability to detect cancer.

Though they are not doctors but various studies have shown the ability of dogs in detecting different forms of cancer: lung cancer, breast cancer, bladder cancer, colon cancer and so on. This they do by always sniffing out the affected parts.

5. Dogs can enhance your mood.

When you own a dog, hardly will you be moody because it will always be there to keep you in company and make things that will get you out of your moody state.

6. Growing up with dogs help to reduce allergies.

Based on a research conducted in University of Virginia, it was discovered that children who lived with pets longer have higher probability of not having pet allergies in the future. And another study gave a positive correlation between the number of pets in various homes and the likelihood of babies developing allergies. It was discovered that when two or more pets were present, the likelihood of an infant developing allergies decreased significantly by 77%.

7. Having exercise with a dog is a good way of relieving arthritis pain.

If you have arthritis or you know someone with it, spending time exercising with dogs can provide a bit of relief from its pains.

8. They keep you active.

A research also concluded that dog owners have better odds of achieving fitness goals than non-dog owners. This is because they tend to be much more likely to walk for at least 150 minutes weekly with their dogs with the dog leash.

Some studies have it that infants who grow up with a pets in their homes are less likely to get sick compared with those who don’t have pets. Likewise, another research found out that petting a dog increase study subjects’ secretion of antibody immunoglobulin A which helps to increase the immunity to diseases.

10. Dogs can increase your life expectancy.

Spending a quality time with your dog can just be the magic you need to long life. This is obvious from some of the studies shared in the points above.